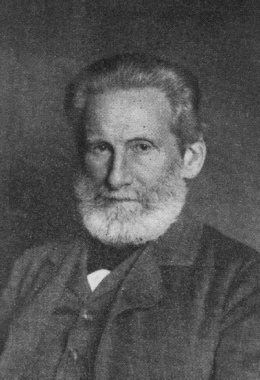 The man responsible for building the present Baptist Church was George Frederick Muntz. His father, who had the same christian names, had been a Birmingham Member of Parliament and the family were business entrepreneurs in the city who had become very wealthy. His father's brother, Philip Henry Muntz, was reputedly responsible for Birmingham obtaining its City Charter of Incorporation in 1838, being the first town to receive it. The brothers both became of parliament. Their surname had originated from Lithuania where their ancestors had lived in the Sixteenth Century.

Mr. Muntz junior lived previously at Beaudesert Park, Henley-in-Arden. He was a man of strong Christian convictions who had originally been an Anglican but later became convinced of the Baptist Church' s teaching and was responsible for building the Baptist Church at Henley in 1867 where he was a regular worshipper.

Moving to Umberslade Hall, a mansion about a mile from Hockley Heath village in 1857, he became known to the local residents as 'the old squire'. He later felt that there should also be a Baptist Church at Nuthurst, the Parochial name for Hockley Heath. He owned much of the land between the Hall and village and decided to build a church halfway between them on a site surrounded by fields.

The original temporary church building was of wood and still stands at a corner of the churchyard. It later served as the Sunday School and then as a day school from 1898 to 1913, known as the 'British School', founded by Mr. Muntz for those children attached to the Baptist Church who were being discriminated against in the village. The headmaster was the church organist, Mr. Kimber, who stayed until the new village school was built in 1913. The building was then again used for church activities but in more recent times has been rented out as a workshop. Although appearing to be insignificant it has recently been pointed out as being of a rare design for the period and worthy of restoration.

Mr. Muntz later gave an additional piece of land for the church and churchyard. It was customary for Free Churches to have a burial plot in those days, and Umberslade is one of the few to still have plots remaining. The church is one of the finest Free Church buildings in the Midlands, and has all the appearance of an Anglican Parish Church. It is of Wilmcote stone with Bath stone carved dressings and is built in Gothic style being characterised by pointed arches. The stone was brought by barge to the wharf on the nearby canal which would have been the normal means of transport in those days. There is seating for 200 worshippers and between them and the raised carved oak pulpit is an open white marble baptistry. Mr. Muntz insisted in the title deed that this had to remain uncovered at all times. There were two small vestries at the rear and a further larger room was erected later in 1892. The windows are of tinted cathedral glass. At the rear a 52ft tower with a clock was erected surmounted by a spire 110ft high.  Eight clarion bells were later erected in the tower. Mr. Muntz had his own door to the church and it seems this was not opened for a long time following his death.