The origins of the Umberslade Baptist Church were well documented by the local school headmaster, John Belton, in a booklet about Hockley Heath village produced in the late 1940's. A whole chapter on the Free Churches went into great detail and has been an invaluable reference in producing the present more modest version.

There was no Free Church or Chapel in Hockley Heath until 1837. In those days denominational differences were very marked and Free churches had not long obtained full freedom to operate independently without permission from the established church.

It was a Congregational initiative that began the present witness in the village. Denominations as we know them today were still being formed in those days and many groups were often referred to as Independents. Non- conformists in the village initially had to meet in their houses for worship. The lack of a building was a matter of great concern to the then minister at Solihull Congregational Church, Rev. William Hood, who let this be known locally. This resulted in a Member of Parliament, Mr. E. Bolton King, who lived in the area, giving a piece of freehold land for the purpose of erection of a chapel. A wealthy Congregational lady in Birmingham agreed to give £100 towards the building costs providing that the other £100 required could be raised locally. A public appeal eventually helped to raise this and the Chapel was opened in 1837 in what was then called Chapel Lane. This was later re-named Orchard Road.

The chapel never had its own minister, but was supported by the churches at Solihull and Knowle. Reports in the 1860-70 decade describe congregations of up to 70, good for a rural community in that situation.

The effect on this fellowship of the opening of the Baptist Church in 1877 was immediate, but there are records which show that, despite the denominational differences in those days, an amicable arrangement was made to work together. In 1878 the Warwickshire Congregational Union appointed representatives to meet with Mr. Muntz, the founder of the Baptist Church, and Mr. Sear, its first minister, to discuss the situation. This resulted in

Mr. Sear becoming recognised as the Non-Conformist Pastor in the village. It is noticeable that in the Midlands generally it is unusual for there to be both a Baptist and Congregational or United Reformed Church in the same area or town. In this instance the Congregationalists decided to continue with services on Sunday afternoons and on a week evening which Mr. Sear was invited to take on alternate weeks. This arrangement appears to have been made in an excellent spirit of co-operation but before long the  Congregationalists had declined so much that the remainder joined with the Baptists. Their chapel was then used by the Baptists as a hall for mid-week activities until the early 1930's when it had fallen into disrepair and was sold  for commercial use. It was eventually demolished in 1998. 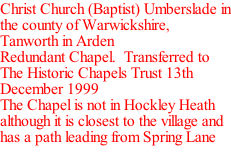 History of a Warwickshire Country Church